Lao Chai village is 6 km far from the centre town, you will see Lao Chai village where the black H’mong people are living, it is also the beginning of a valley which is called Muong Hoa valley. From a high point of the main road 8 Km from Sapa town, great view of the whole village open wide to offer the marvelous panorama of the village, backed by high mountains and facing the river. Here you will enjoy the fresh air, see terrace fields, stream, visit and discover some of the H’mong’s families, three large villages with over 100 families of the Black H’mong ethnic, and people here are quite hospitable. In this village which you will have a welcome feeling at any house of the hospitable people there. You can interact them, learn about their culture and customs. 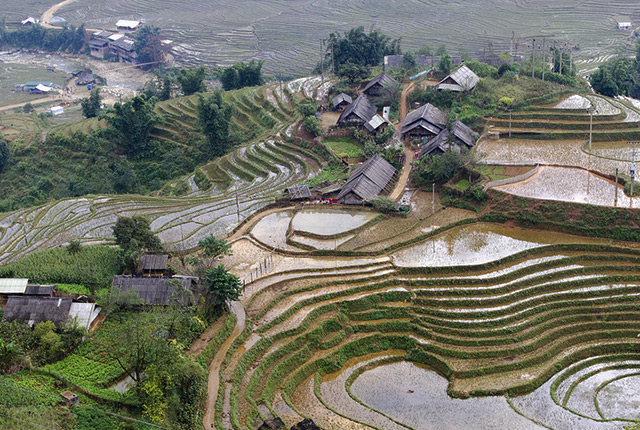 The Giay
Only 2% of Sapa’s population comes from the Giay ethnic group, and so it can be tough to discover much about this fascinating community that immigrated to Vietnam from China only two centuries ago. A majority of Vietnam’s Giay group live in more northern provinces in the country where a stilted house (the traditional-style home) is common even now. In the sunny and fertile Lao Chai village, though, Giay homes have adapted to be closer to be only one story, usually with a simple interior in a dirt floor.
Distinct from the H’mong communities they live alongside, the Giay wear relatively simple clothing that boasts splashy, vibrant colours but less ornamentation than H’mong textiles. Thanks to their geographic roots, a whole host of Giay cultural elements feel distinctly Chinese, with the group’s clothing and cuisine borrowing flavours from Vietnam’s northern cousin. In Lao Chai, the Giay sustain their livelihoods and health in much the same way as the H’mong – by raising livestock and tending to endless rice terraces and mountain fields.

The Black H’mong
Making up a significant part of Sapa’s ethnic minority population, the H’mong community in Lao Chai is one of many scattered throughout the town’s verdant valleys. The Black H’mong are a distinct community within the larger H’mong ethnic group – so named after the deep indigo dye used in nearly all of their traditional clothing. Green, blue and purple is highlighted with splashes of red – and the Black H’mong’s uniquely vivid textiles have become a favourite element in souvenir shops and markets throughout all of Vietnam.

Black H’mong communities remain deeply traditional, with men and women often getting married as young as their mid-teens. It’s not unusual to meet a local H’mong villager of 25 that already has a handful of children – made even more astounding by the fact that many H’mong communities have few traditional forms of income. Instead, most families live off of the land and rely very little on income from selling textiles in local markets. Only when buying livestock or home goods will Black H’mong families need money – most (if not all) of their food comes from their crops and animals.